I don’t exactly know when the so-called Civil War began in the contemporary history of El Salvador. I just lived there as a simple housewife without knowing about any problem in their history nor of related any international problem. I lived there because I married a guy from El Salvador whom I accidentally met in a high school where I was working as a teacher in Tokyo. He came there as a temporary teacher of Spanish for the students who came back to Japan from some Spanish speaking countries.

Even as a commoner, the confusion caused by the Civil War could be felt day by day in my daily life. It was towards the end of the 1970s.I was unaware of the system of this country at that time, but we could have water service only in the morning. I, who came from a country where we could get water and safety so easily, felt it was too hard to get water every morning.

There was no problem for the people who lived in Escalon, the high class zone which had a storage of water with an electric generator, but the problem of lack of water always made the poor people who did not have such equipment suffer. Inevitably I became nervous hearing the very faint sound of water from the aqueduct. The sound of water seemed to come from a mountain far away, sounding

“karakarakara” which made me nervous whether at midnight or at dawn. Whenever I heard that faint sound, I got up to draw water with all the buckets and bowls that I had.  It was my daily task while I lived in that house.

However the water flowed no more than 20 minutes at a time because the competition of the people to get water was escalated day by day. The washing machine was useless in my situation. There was a kind of pool for water

called “pila” the size of which was just that of a Japanese classic bathtub. It was a pool of water for washing clothes, but I saved water there for cooking. We could not clean there from fear of water not coming knowing that its bottom was dirty with fur. We saved water there when it came, and we used the surface water, boiling it to cook, waiting for the rubbish in the upper part to get down to the bottom.

The city we lived in was becoming more and more dangerous day by day, and the military force was repeating acts of slaughter. The sight of corpses left lying like things in the corners of the city was a “common sight”.  Even among our friends and acquaintances, some were kidnapped, some were imprisoned, some were beaten to death, and were lost.

One day, I went to market to buy some food, and found some people laid on the way. Without thinking too much, and jumped over them, I hurried to the market. I thought some drunken people were sleeping there without thinking of another people passing by.

But when I arrived at the market, many shoppers came around me, asking, “Senora, how could you come here?

Didn’t you get hurt?”  “ What! What has happened?” I asked them. Then they gazed at me shouting just “ Oh my God!  Impossible!”

“ There was a street fight just over there! The military force and the guerrillas were having a gun fight. Nobody could go out from the market.”

“Oh my God!” it was I who shouted back. The city was calm at that time, and I hadn’t noticed a gun fight. I finished shopping and dashing home as fast as possible. And when I saw the way I walked a while ago, I found the man I jumped

over, and I was astonished. I saw a gun belt with many shots.

And the bodies laid on the way I was going had the same thing around their waist. I noticed that I had been running over dead soldiers going to and from the market.

The sight was “calm” but it was the world of “RASHOUMON”, a hell of terrible confusion. But this is my feeling that I am writing this essay now after a long time had passed from those days. At that time my nerves got used to feeling such scenes as normal.

I don’t remember when it happened. One day because of a strike of the Water Works Bureau, all the service of water and electricity stopped in all parts of this country which already lacked of water even on normal days. Whether there was a strike or not, depending on where they live, lack of water was a daily situation. Whether the reason or purpose was right or not those who suffered without

water and electricity were the poorest people   who draw water sharing each other from the common aqueduct.

Although it was dirty, we had a “pila”, a water pool for washing clothes, but for those who could get water from the common aqueduct in a slum there was no pool of water.

People in slums who were cut off from the only one source of the water rushed to the city to beg for water. The situation was so serious that men and women, even small children who could walk turned to the city with buckets or bowls, small cans or plates to beg for water. People knew where there was water.  It had to be beneath the houses of rich people.

GIVE ME WATER, give me water!

People knocked at the doors of all the houses that they could see. But in that

unusual situation, there was almost nobody who would open the door to unknown people. Finally they knocked at the door of our house.

“Don don don,” “agua, agua, por favor!” “Dame agua por favor” (Give me water, please.) Then my husband could not bear to be silent any more, opened the door at last, and said, “ We don’t have a storage of water with an electric generator, but if you don’t mind,  we can share some of the water of that pila.” He put a little water in the bottle of a child, getting it from the pila. But then there formed a long line of people who wanted water.

I was afraid to see that line. Our water will be gone. I have to stop my husband. I told him in a whisper.  “ Water for us will be gone. I won’t be able to cook lunch or wash our clothes.”

Then he said. “ They aren’t begging water for their lunch or for washing clothes. They had not one drop of water to drink when they get up in the morning.” “But…” I said.

“When you go to the office, you can find a storage of water with an electric generator there. What do I do in this house without water? Nobody knows when the strike will be over. There is no guarantee when water will come.” I could not agree with my husband who could say an idealistic opinion being in a safe place and only he could be happy.

But my husband told me looking at me straight in the eye, in a calm voice, “My fellow human beings are asking for water. Give water to whoever asks you. If you give them water, water will come.” The order of my husband was so dignified that there was no other option. He left those words and went to work.

“Stupid!” Even I felt resentment against him in the depth of my heart and sent him off. I thought I could not follow such an unrealistic man. At the bottom of the pila, there was left nothing but foul water. I closed the door, and never opened it again without saying the reason when the children knocked at the door for water. The children threw stones at the door shouting  “ Stingy Chinese!” and went away.

It was lunch time. Without doing anything I stayed in bed. And I heard a very faint sound which I remembered having heard.

It was the very sound that my nerves remembered who had lived a life without water whether  or not there was a strike.

I hardly believed my ears. The strike was not over. It was impossible that water should come. But I tried to put a pan under the faucet and twisted the tap. A little stream of water trickled out. It sounded like “chorochorochoro…” And the last drop of water formed a drop in the round little pot and stopped.

I was gazing at the water trickling in the pot. My heart was trembling with emotion and even a tear dropped from my eye. It was a pot of water for the two of us: my husband who came back for lunch and me. The water filled the small pot and no more  poured out.

“Give them water, and water will come.” The water which he spoke of filled one small pot.

At that moment, a passage from Exodus passed through my brain. The manna supplied for the Israelites allotted only one for each person. If one saved more for another day, another person would die.

Looking at the water which came only for one lunch only for the two, I muttered by myself the words that my husband leftme, “ Give them water, and water should come.”

Light can be seen only in thedarkness.

In the city was repeated that disaster and hell.

The universe seemed to be covered by the darkness.

But I saw light in darkness. OH! I woke up. 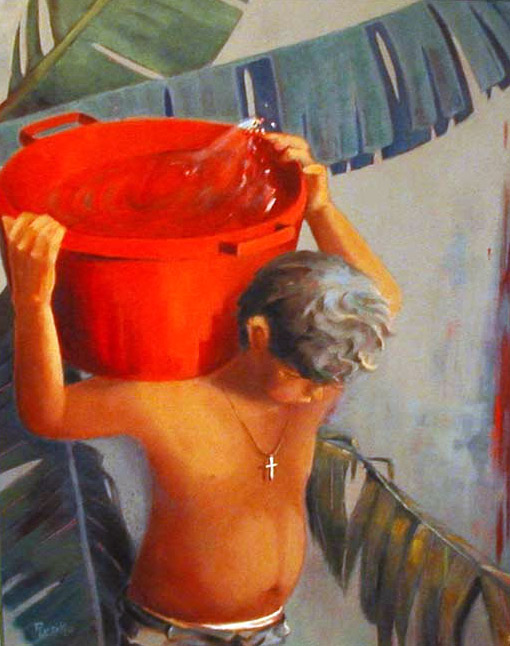 This is one of the experiences that I had during the civil war in El Salvador from 1976 to 1984. In 1984, I came back to Japan with my family as a refugee. When I told this kind of story to my fellows Japanese as a common story, they were astonished and treated me like a kind of phantom.

Japan became so peaceful and rich that the people forgot everything about the war from 1941 to 1945. It is good to be prosperous and peaceful.

But I think to understand that peace and prosperity are so good is , because I had an infantile experience to have lived under the great air-raids of Tokyo, losing my father and a sister and having had to get over the crisis after the end of the war with 6 brothers and mother. And moreover I had an experience of the Civil War in

I don’t know if there is some meaning in meeting each people at this moment but I will be happy if some of you read one of the stories of my experiences and feel something.